For the fluorescent imaging of single molecules in vitro and in cells, probes need to be attached to molecules of interest. Probes can be synthetic fluorophores or recombinant fluorescent fusion proteins, such as green-fluorescent protein (GFP) and related proteins, which are co-expressed with the protein molecules, or fluorescent semi-conductor nano-particles (quantum dots). Alternatively, non-fluorescent particles that scatter light, such as colloidal gold or silver particles, have been used.

(a) Epi-illumination (left) and total-internal-reflection fluorescence (TIRF) illumination (right) are shown. The excitation beam (green) and backwards emitted emission light (orange) are separated by a dichroic mirror in the case of epi-illumination, and by a dichroic mirror or small mirrors at the edge of the objective in the case of TIRF illumination. An electron multiplying charged coupled device (EMCCD) camera is used for low noise imaging at low light levels (for example, for detecting single fluorophores).

(b) TIRF concentrates the illumination light to a thin layer near the surface. Single fluophores (orange) that are attached to kinesins moving along surface-attached MTs can be imaged selectively, while fluorophores in the background, further away from the surface, remain unexcited (dark grey spheres).

(d) 2D intensity profile of an image of a single deac-aminoADP attached to a cover slip. The maximum of the intensity clearly peaks over the background noise. The centre of the maximum, and thus the location of the fluorophore, can be determined with an uncertainty limited by the standard error of the mean of the distribution.  Figure in part d reproduced with permission from Sakamoto et al. Nature 455, 128-131.

In our lab we also have a two-color TIRF setup to study the behaviour of two different color-labelled samples simultaniously. 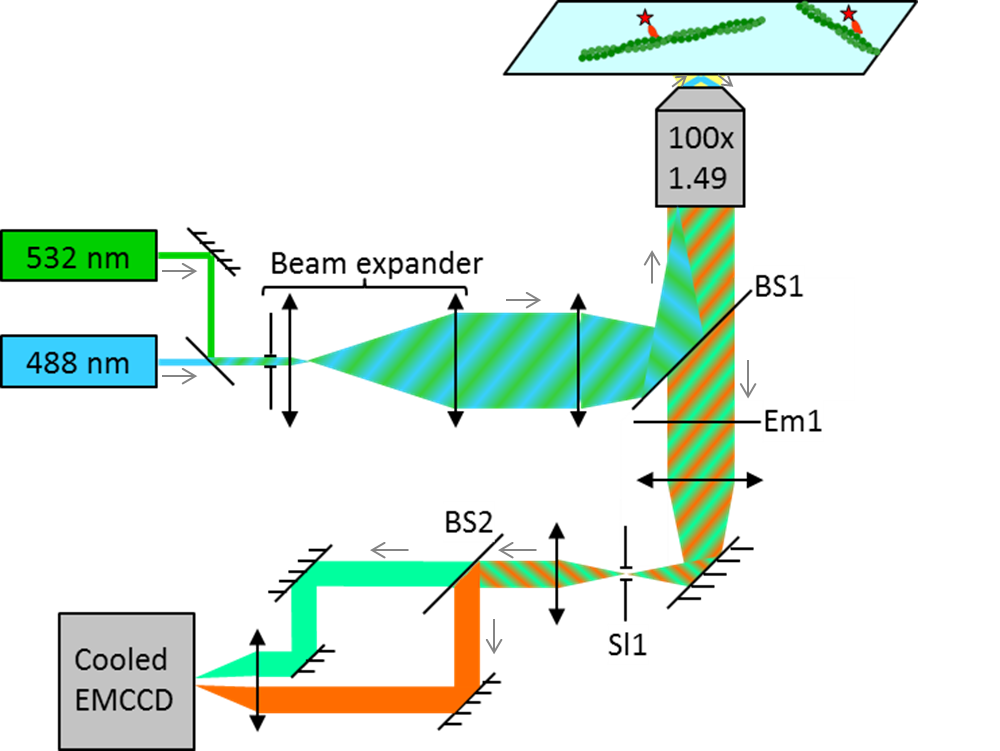 The technique behind the two-color TIRF is demonstrated on the example of actin-myosin interactions:

Alexa488-actin is attached to a coverslip surface via NEM modified myosin II. 50-100 nM MMD labelled with a Cy3-FLAG antibody is introduced into the flow cell in the presence of 2 mM MgATP.

A dual band beam splitter (BS1) allows simultaneous TIRF excitation of Alexa488-actin and Cy3-MMD. The emission signal of the dyes is first filtered by a dual band emission filter (Em1) to block any residual laser light. After spatial filtering of the image (Sl1), a second beam splitter (BS2) splits the emission from the Alexa488-actin and Cy3-MMD. Each dye is then imaged onto one half of the chip of an EM-CCD camera.