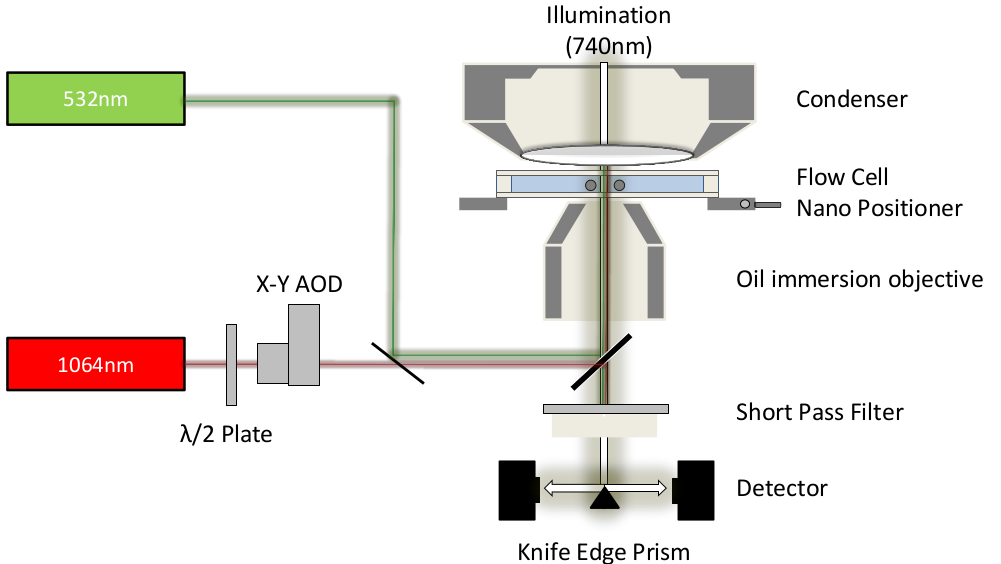 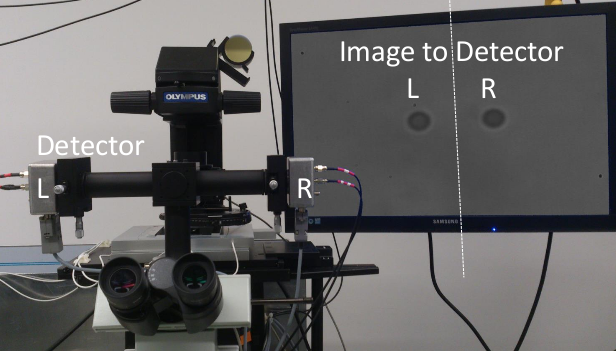 Two four-quadrant photodetectors are being used to measure the position of both beads holding the actin filament by spliting the microscope image with a knife edge prism mirror.

In our lab we are equipped with two optical tweezers that have a very fast detection (µs) due to a custom-build force detector. Furthermore, both traps can run independently without any need for a timesharing of the AOD. Our traps has also a built-in TIRF (532nm).

In order to detect gold-nanoparticles, we installed a laser-backscattering setup (647nm)

(a) Ray optics sketch of light rays incident from different directions that are refracted through an optically trapped bead that is positioned slightly off the optical axis, and below the focus of a strongly focused laser (red cones). The width of the arrows indicates the light intensity, which is highest on the optical axis (as represented by the thickest arrow).

(b) The deflection of each photon results in a momentum change and a transfer of momentum onto the bead. Since wavelength does not change, the magnitude of the momenta is unchanged (as indicated by the equal length of arrows). Arrows between solid (original photon momentum) and dashed (deflected photon momentum) arrows show the momentum transfers for individual photons out of the three rays of light, drawn in colours corresponding to part a.

(c) The total momentum transfer per time on all deflected photons in the three rays equals the force exerted on the bead (indicated by the blue arrow), which is the sum of the forces produced by the three rays. The gradient of intensity in the laser cone implies more photons per time impinging near the optical axis, that is, the dark grey arrow is longer.